#‎BOYCOTTDILWALE‬
In the name of the great Chhatrapati Shivaji Maharaj, he who fought the mightiest empire in the world, that of Aurangzeb, with only his wits, his extraordinary courage, his utter devotion to Mother India and a few hundreds courageous Hindus, Boycott Shah Rukh Khan & Aamir Khan.
Please tweet #BoycottDilwale to ten of your friends and ask them to retweet to ten of their friends, so that it starts trending.
Come on, O my Hindu sisters & brothers, wake-up! You have nothing to be ashamed! You belong to the most ancient spirituality, that which sees the World as One Family. You are the most tolerant people in this planet - you can enter a church, a mosque, and a buddhist temple - and still see God there. Yours is the last Knowledge left in the world, which tells you what happens after death, why we are born again and again, what is Consciousness, what is Mind, what is an Avatar, what is Karma, what is Dharma....
Wake-up o my brothers and sisters. You are not lambs anymore, that were slaughtered by the Moghols or General Dyer. You have the numbers – every sixth person on this planet is a Hindu! You have the brains – your children top in every university of the world! You have the power – Hindus now are heads of dome of the biggest multinationals! Yours is also a Consumer's power that ignores itself. If you boycott Shah Rukh Khan’s and Aamir Khan’s films, they will feel the economic pinch and stop using the word “Intolerance” in the most tolerant country in the world. They will stop abusing a people that gave them hospitality, love, adoration even - to be kicked in the face in return.
Wake up of Hindus, stop being passive, selfish, and fearful. You have had some of the greatest heroes and heroines, from Shivaji Maharaj, to King Deva of Vijatnagar, to the Rani of Jhansi, or Ahilyabai Holkar. Look up to your avatars, Lord Krishna, who fought the battle of Kurukshetra, to Sri Aurobindo, whose basement was used to make bombs to fight the British, to Swami Vivekananda, who showed too that Hinduism is not only about being yogis in Himalayan caves, but also about action in the world, battle against Asuras for the triumph of Truth.
Wake-up of my Hindu sisters and brothers, your time has come. Only your spirituality can save the world from the clash of civilizations, which is going on at the moment. But for that, India needs to come-up, as an industrialized nation, on par with the West and China - but without losing this great Knowledge that some call Hinduism.
Wake-up O Hindus, you are the Light of the World 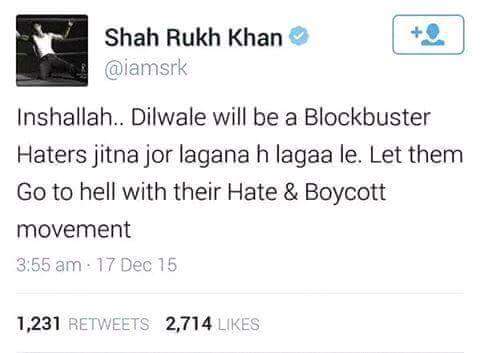 I got it on whatsp

I got it on whatsp

I follow him on Twitter . There is no such message on his official handle. Please stop spreading such nonsense