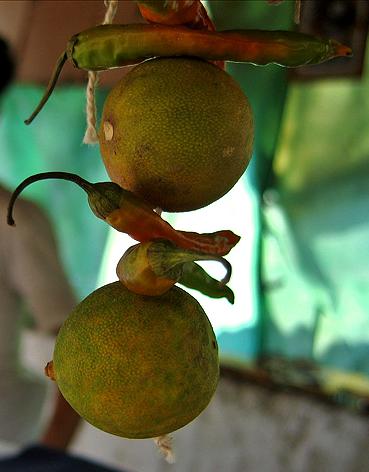 Nazar Suraksha Kawach means the "evil eye bead", is actually a stone bead, which is worn to protect oneself from evil looks. The stone is an amalgamation of molten glass, iron, copper, water and salt. This particular combination of minerals and metals is believed to provide a shield from the forces of evil. The Nazar Suraksha Kawach has the symbol of an eye worked upon it. The symbol of the eye is regarded as a potent amulet for protection against evil forces in almost every culture of the world like Jewish, Islamic, Hindu, Buddhist and Christian. Thus, in Turkey, you have an eye for an eye. http://gtmteleshopping.com/nazar-suraksha-kawach.aspx

NSK help in removing negative influences in ones life. These amulets and talismans are considered to be powerful tools which help in protecting against bad and negative effects in ones life. The NSK gives protection and brings luck to all. Have you just had a new child? Bought a new car? Built a new office building? Worried that your "friends" and others are filled with envy about your good fortune? The bead reflects the evil intent back to the onlooker. It somewhat resembles an eye and it is said the typical blue color is a factor in protecting the user 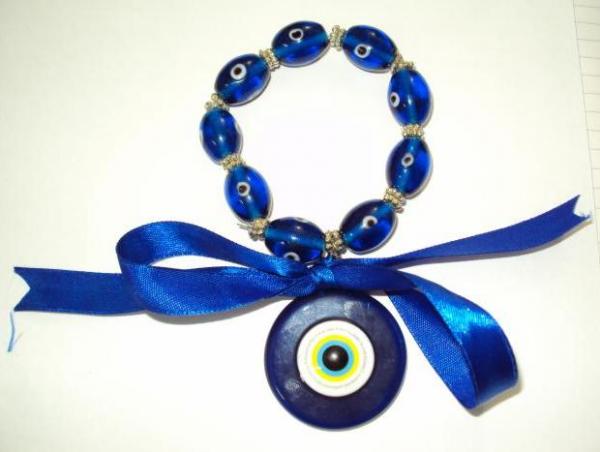 Disks or balls, consisting of concentric blue and white circles (usually, from inside to outside, dark blue, light blue, white, dark blue) representing an evil eye are common apotropaic talismans in the Middle East, found on the prows of Mediterranean boats and elsewhere; in some forms of the folklore, the staring eyes are supposed to bend the malicious gaze back to the sorcerer.
Known as nazar (Turkish: nazar boncuğu or nazarlık), this talisman is most frequently seen in Turkey, found in or on houses and vehicles or worn as beads.
A blue eye can also be found on some forms of the hamsa hand, an apotropaic hand-shaped talisman against the evil eye found in the Middle East. The word hamsa, also spelled khamsa and hamesh, means "five" referring to the fingers of the hand. In Jewish culture, the hamsa is called the Hand of Miriam; in some Muslim populated cultures, the Hand of Fatima. However, it is considered a superstition to practicing or religious Muslims that any symbol or object protects against the evil eye. In Islam, only God can protect against the evil eye.
In Islam
Evil eye, Isabat al-’ayn, is a common belief that individuals have the power to look at people, animals or objects to cause them harm. In Islam, God is the only one who can protect against the evil eye; no object or symbol can. Muhammad prohibited the use of talismans as protection against the evil eye because it is idolatry, the form of protection allowed being supplication to Allah.[9] It is tradition among many Muslims that if a compliment is to be made one should say "Masha'Allah" (ما شاء الله) ("What God wills") and also "Barak'Allah" (تبارك الله) ("Blessings of God") to ward off the evil eye.