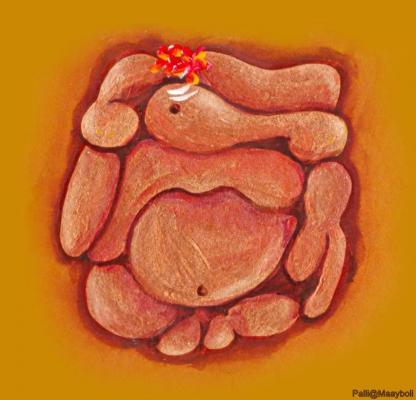 [edit] Legend
Parvati desired to have Vinayak as her son and so performed penance for 12 years in the caves of Lenyadri. Ganapati was pleased by this and decided to grant her wish. On one Bhadrapada Shudh Chaturthi, while Parvati was worshipping an idol of Ganesh which she had made from a scarf, the idol came alive. It told Parvati that, as per her desire, Lord Ganesh had taken Avatar in her house. On the 11th day she named him Ganesh, meaning a person who keeps three qualities—Satva, Raja and Tama—under control. Lord Shiva gave him a boon that whosoever remembers Ganesh before starting a work, will successfully complete that work.

Ganesh grew up for 15 years at Lenyadri. The demon king Sindhu, who knew that his death would be at the hands of Ganesh, sent demons like Krur, Balasur, Vyomasur, Kshemma, Kushal, etc. to kill Ganesh in Lenyadri. Instead Ganesh killed all these demons in his childhood. Ganpati also performed many bal-leelas in this place. Hence Lenyadri is considered a holy place.

At the age of six, Vishwakarma worshipped Ganesh and endowed him with Paasa (noose), Parasu (axe), Ankush (hook) and Kamal (Lotus).

Parvati's second name is "Girija," and "Aatmaj" means son, so one of Ganesh's names is "Girijatmaj."

[edit] Shree Girijatmaj's Temple and idol
Girijatmaj Vinayak's temple is in the 8th of 18 Buddhist caves known as Ganesh Gufa, or "Ganesh caves." The entire temple is carved out of a single stone and faces south. It is located on a mountain, and one has to climb 307 steps to reach the top. In front of the main mandir there is a large hall, approximately 53 by 51 feet. The main mandir hall is 7 feet high and has 6 stone pillars with cows, elephants and other animals carved on them. Girijatmaja's idol faces east and is carved out of the stone wall of the cave. Only one of the idol's two eyes can be seen. The earlier idol was covered with armour, obstructing a full view of it. After the armour was removed, Girijatmaj's idol could be seen, with its neck turned to the left side.

[edit] Getting there
One can reach Lenyadri from Mumbai or Pune in the following ways:

If you want a nice pleasant stay without spending much , then "hotel pratik" is the best place to hangout , this hotel provides lodging and boarding facility at cheap rates. It is situated in junnar village , near narayan gaon - junnar haighway.